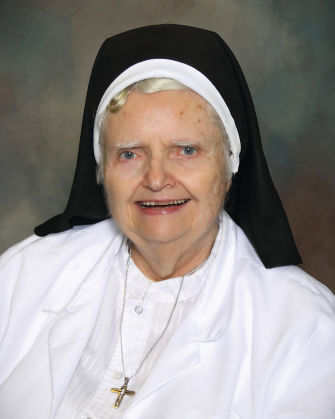 Mary Catherine Rush was born January 21, 1931 at seven months gestation to John and Mary (Enright) Rush in Sioux City, IA. Because she was so premature, she was baptized on the day she was born. Her parents wanted a large family and had purchased a three story home with that in mind, however, seven children before Mary Catherine died at birth or were stillborn.

Music was an interest from her earliest years. After having rheumatic fever when she was young, she was unable to take part in strenuous games, so she spent her childhood on the piano bench and took lessons to play the double bass. She was educated by the Sinsinawa Dominicans at Blessed Sacrament School and the BVM Sisters at Cathedral High School until her sophomore year at which time she transferred to East High School. It was here that she experienced a cultural shock, because the school was co-ed and had hundreds of students.

East High was also where Mary Catherine’s love of the Spanish language began. She took every opportunity to develop her Spanish skills beyond her school classes. She had the habit of frequently stopping at a local restaurant to see if they had any bones for her dog. This gave her several occasions to practice her conversational Spanish with the staff.

Mary Catherine entered the Dubuque Franciscans on August 24, 1952. The following year on August 12, she was received into the community and given the name Sister Mary Gregoria. Sister’s first missions were teaching music to students at St. Mary’s, Cascade, St. Francis Xavier in Dyersville, and Briar Cliff College from 1964 to 1970. Mary Gregoria spent 1970 to 2012 in several Florida cities assisting the elderly. In 1982 she also began working for the diocese of Petersburg, FL ministering in the Chancery’s Office of Respect Life. In 1986 Sister Mary Gregoria became interested in Public Access Television, and within three months she became certified in technical skills such as camera operations and computer graphics. Sometime in 1986 Sister merged her hobby of TV production with her apostolic work as an advocate for the elderly into a prize-winning video. The film received the Silver Cassette Award.

Toward the end of 2012, Mary Gregoria came to Dubuque to retire at Clare House.

Sister is survived by her Franciscan sisters.

Sister was preceded in death by her parents and stepmother, Eileen Rush.