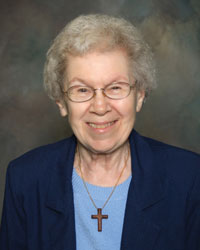 Lorraine Kutsch, daughter of the late Clarence and Irene (Nierling) Kutsch, was born July 17, 1923 in Dubuque.  She was baptized and confirmed at St. Mary Church in Dubuque.  She entered the Sisters of St. Francis in Dubuque from St. Mary’s on August 25, 1940. She was received with the name Sister Mary Corinne on August 12, 1941, and made her final profession of vows on August 10, 1946.

Sister received her BA in elementary education from Briar Cliff College, Sioux City, Iowa.  She ministered as an educator in Iowa at Templeton, Garnavillo, New Hampton, and Dyersville.  In Illinois she served at Midlothian; St. Ann, Hazel Crest; and Lansing and in Minnesota at St. Cloud. She also served at Alverno Apartments and as the Activity Coordinator of Stonehill Care Center both in Dubuque.

Sister is survived by her brothers, Charles and Reverend Eugene (Gene) Kutsch; a brother-in-law Alfred Breitbach; nieces and nephews, and her Franciscan sisters.

Sister was preceded in death by her parents; her sisters, Rita Breitbach and Adele (Paul) Kass; and a sister-in-law, Connie Kutsch.