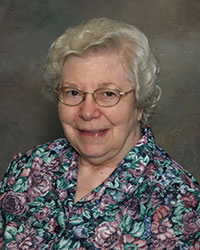 The Rite of Final Commendation and Celebration of Life will be held at the Clare House Chapel, Mount St. Francis Center at 1:00 p.m. on Wednesday, December 2, 2020.

Noreen, daughter of the late Edward Connell and Elizabeth (Bierl) and Nelson Pearce, was born August 24, 1923 in Chicago. She was baptized at Misericordia Hospital, Chicago and confirmed at Immaculate Conception Cathedral, Kansas City, MO. She entered the Sisters of St. Francis in Dubuque on August 25, 1943. She was received with the name Sister Mary Celestine on August 12, 1944 and made her final profession of vows on August 12, 1949.

Sister was preceded in death by her parents and stepfather.