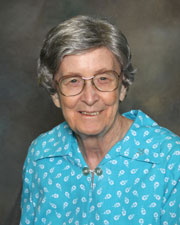 The Mass of Christian Burial will be held at the Clare House Chapel, Mount St. Francis Center at 1:00 p.m., Thursday, June 2, 2022.  Masks will be required.  Guests unable to attend may participate via livestream at: www.youtube.com/dubuquefranciscans

Veronica, daughter of the late Joseph and Lucy (Spelman) Schafers, was born October 4, 1921 in Denver, CO. She was baptized at St. Francis Church, Denver and confirmed at Our Lady of Sorrows, Chandler, OK. She entered the Sisters of St. Francis in Dubuque from St. Peter and Paul Church, Cushing, OK on August 25, 1945. She was received with the name Sister Mary Herman on August 12, 1946 and made her final profession of vows on August 12, 1951.

Sister is survived by her Franciscan sisters.

Sister was preceded in death by her parents; her sisters, Sister Theresa Schafers, OSF and Sister Teresita Schafers, OSF; and her brother Reverend Herman Schafers.