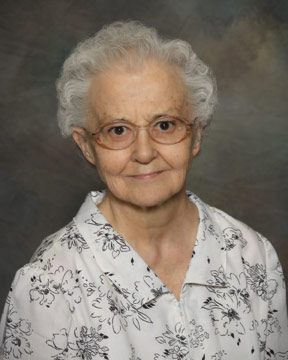 Lorraine Ruth was born to Frank and Helen Agster Schulewitz in Melrose Park, Illinois, on May 7, 1929.  She had an older brother, Lester, and a younger brother, Francis.  A month after the birth of Francis, her mother died of an infection.  For eight years Frank cared for his children in various ways.  The Poor Handmaid Sisters, an order to which a cousin of Lorraine’s mother belonged, took care of Francis for ten months.  Lester and Lorraine lived in the home of an aunt for some time.  In 1940, Frank hired Margaret Schram to care for the children, and the following year Frank and Margaret were married.  Another child, Veronica (Bonnie), was born to complete the family.

Lorraine attended school at Sacred Heart Parish in Melrose Park where the Poor Handmaids had been replaced by the Dubuque Franciscans.  There was no Catholic high school in Melrose Park, so Lorraine attended Siena High School on the west side of Chicago, taught by the Mercy Sisters.  One of the sisters had a small vocation club, and it was here that Lorraine became sure that she would enter religious life.  However, she felt she should work for three years first to help support the family.

In 1949, Lorraine’s third grade teacher, Sister Estelle Plein, came to Melrose Park for a visit.  She invited Lorraine to see her collection of Madonna pictures.  Eventually she said to Lorraine, “I am going back to Dubuque this week.  Would you like to come along?’  The planned three years of work weren’t complete, but Lorraine jumped at the chance. Although Mom Schulewitz considered her decision an honor, her father was not happy. Nevertheless, Lorraine entered Mount St. Francis on August 25, 1949.  At her reception a year later, she was given the name, Sister Mary Viator.

Following her profession, she taught grades five and six at Dyersville before teaching grades seven and eight at Alton, Iowa, and grade 8 in Niles, Illinois.  After finishing her college work, she taught at St. Joe, Bode, before being one of the pioneer sisters at Wahlert High School.  In 1962, she began an MBA program at Notre Dame in the summer sessions.  After completing that program, she served as treasurer at Briar Cliff College and also taught some business courses there.  In 1972 she was permitted to develop a prayer ministry, and supported herself by working in a public accounting firm in Sioux City.  In 1980, she moved into the Catholic Worker House along with Srs. Jeanine McDermott and Grace Ann Witte.  Here they cared for abused women, women in hiding or transition, and pregnant girls sent there by Catholic Charities. In 1984, after having made thousands of gallons of soup, Sisters Viator and Jeanine returned to work in the business office at Briar Cliff. In 1996 they retired and moved to Alverno Apartments to clean and help the residents in a variety of ways.  Failing health forced the end of this ministry, and Sister moved to Mount St. Francis in 2010.  During her last years, it was evident that she endured much pain.  She never initiated conversations about her health, but always answered honestly when anyone asked.  Sr. Jeanine, who had made it possible for her to participate in daily community life by pushing her wheelchair everywhere, was able to be her faithful friend and caretaker to the end.

Sister Viator is survived by her brother Lester (Greta) Schulewitch and a step-sister Bonnie (Veronica) Colbert and her Franciscan Sisters with whom she shared 64 years of her life.

She was preceded in death by her parents, her step-mother Margaret (Schram) Schulewitz, and her brother Francis.