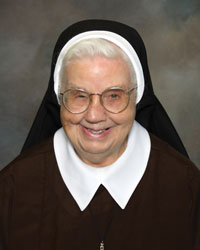 The Sisters of St. Francis of the Holy Family commend to your charity the soul of their beloved Sister Ramona Colling, OSF, who was born, January 15, 1921 and departed this life October 3, 2016 in the 73rd year of her religious life.

Valeria Colling was the seventh child born to Fred and Mary (Marx) on a farm in Granville, Iowa. Both her parents were of Luxembourg heritage and the family spoke the language in their home. Valeria was very proud to be bi-lingual and she could speak it throughout her entire life.

Living on the farm was one of her greatest joys. It was there that she learned to appreciate nature: flowers, birds, growing crops, sunrises and sunsets, the rising moon, and the list continues. Leaving farm life was one of the most difficult things about entering the convent.

After attending school at the age of five in a one room school house until third grade, Valeria attended St. Joseph School in Granville. All the teachers there were Sisters, so for her, she called it “Sister School”. The school ended with 10th grade, at which time she joined the group who commuted to St. Mary’s Academy in Alton for grades 11 and 12. With this educational background she thought she should be a teacher and after some college years, Valeria began teaching in a one-room rural school with nine students in the fall of 1939.

The time had come for her to make a major decision in life. She had to follow her vocation to religious life, which she had decided upon before she finished high school. On August 25, 1943, Valeria took the train from Marcus, IA to Dubuque by herself and became one of sixteen aspirants entering Mount St. Francis. It was not easy for her to give up the independent life and the love of the farm, but Sister Helen Marie was very wise and tactful in dealing with her.

On August 25, 1944, Valeria was given the name Sister Mary Ramona. Completing the novitiate training, Sister began her teaching career in the elementary schools at Hospers, Dubuque, Ionia, Stacyville, Larchwood, and in the high schools at Dubuque, Waterloo, and Sioux City.

In 1994, Sister celebrated her golden jubilee, and decided to retire from classroom teaching. However, she couldn’t break from school completely, so she tutored students with special needs, did some substituting, filed in the business office, helped with mailings, judged speech contests, and worked outside in the yard. As she said of her retirement, “I kept comfortably busy”.

Sister Ramona also enjoyed her time reading, playing cards, watching the game show, Jeopardy, playing bingo, and sharing stories. And who can forget that at the age of 93, Sister had her first plane ride with the pilot, Steve Wagner, an employee at Mount St. Francis.

Sister is survived by her sisters Agnes La Bohn and Florence Smid, her nieces and nephews, and her Franciscan sisters with whom she shared 72 years of her life.