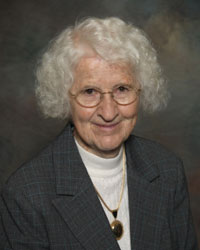 Sister is survived by her sister, Harriet Weeg, nieces, nephews, and her Franciscan sisters.