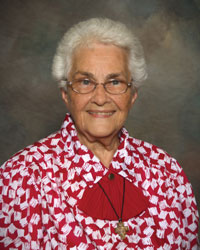 A private Celebration of Life and Rite of Final Commendation will be held at the Clare House Chapel, Mount St. Francis Center at 1:00 p.m. Friday, February 19, 2021.  Burial will be in Mount Calvary Cemetery.

Josephine, daughter of the late Henri and Barbara (Wantz) Schmitz, was born October 28, 1922 in Jefferson, South Dakota.  She was baptized at St. Peter’s Church in Jefferson and confirmed at Sacred Heart, Sioux City, Iowa.  She entered the Sisters of St. Francis in Dubuque from Sacred Heart on September 14, 1940.  She was received with the name Sister Mary Philip on August 12, 1941, and made her final profession of vows on August 10, 1946.

Sister received her master’s degree at Clarke College, Dubuque.  She ministered as a teacher in Iowa at Granville, Dyersville, St. Mary’s-Waterloo, Stacyville, St. Michael- Sioux City, Sacred Heart-Dubuque, LaMotte, Guttenberg, and St. Mary-Dubuque.  In Illinois she was missioned at Corpus Christi-Chicago and Midlothian.  She later ministered at Alverno Apartments in Dubuque as an office assistant and meal coordinator for seniors.