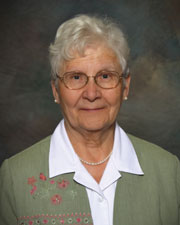 On August 23, 1929 a child was born to Joseph and Catherine (Miller) Einck on a farm near Ossian, IA. Two days later she was baptized and given the name Marian Rose. Marian had three older brothers. She also had six more siblings, three boys and three girls, who died in infancy. Marian was the only one of the last seven children who survived.

As a first grader at St. Francis de Sales in Ossian, she rode to school with her brother, a high school senior, in their Model T. During the winter months she stayed with the Sisters. This boarding experience taught her wonderful things about the Sisters. Within three years of beginning high school, the teachers had prepared Marian for graduation.

Unknown to her parents, Marian applied for admission to the Sisters of St. Francis in Dubuque. However, arrangements for black stockings and black shoes was cause for her to inform her parents. Marian’s mother was delighted, while her father remarked, “You may come home anytime.” Marian entered the Franciscan community on August 25, 1945 and the following year on August 12, 1946, Marian was given the name Sister Mary Raphael.

Sister’s first fourteen years of ministry were teaching elementary education throughout Iowa in Dyersville, Ionia, Holy Ghost, Dubuque, and New Hampton. The next fourteen years were in high school education at Wahlert, Dubuque and in Oregon at North Catholic in Portland and LaSalle in Milwaukie. Her last years of teaching were at St. Edwards, Waterloo, IA followed by St. George and SS. Peter and Paul in Glencoe, MN.

In 1982 Sister Marian became Director of the Divorced/Bereaved for the Archdiocese of Dubuque, a position she held for fourteen years. After thirteen years in parish ministry at St. Francis Basilica in Dyersville she retired to Mount St. Francis, Dubuque in 2009. Sister moved to Clare House in 2017.

Sister is survived by her nieces, nephews, and her Franciscan sisters.