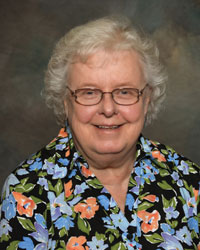 The Celebration of Life and Rite of Final Commendation will be held at the Clare House Chapel, Mount St. Francis Center at 1:00 p.m. Monday, November 23, 2020.

Kathryn, daughter of the late Jerome and Marion (Hohnecker) Luedtke, was born November 6, 1941 in Dubuque. She was baptized and confirmed at Holy Trinity Church, Dubuque. She entered the Sisters of St. Francis in Dubuque from Holy Trinity on September 3, 1960. She was received with the name Sister Martha Ann on August 10, 1961 and made her final profession of vows on August 12, 1968.

Sister received her BA in Elementary Education from Briar Cliff College, Sioux City, IA and later received EMT training. She taught in Iowa at Dyersville, Kingsley, St. Mary’s, Waterloo, and in Crescent City, CA. In Dubuque she ministered at the Dubuque Community YMCA and Alverno Apartments.

Sister was preceded in death by her parents and her brother, Michael Luedtke.