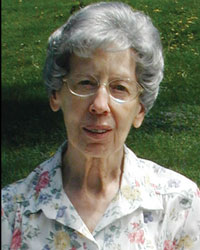 Patricia, daughter of the late Edward and Jennie (Kisner) Stork, was born March 18, 1927 in Mason City, IA. She was baptized and confirmed at Holy Family Catholic Church, Mason City. She entered the Sisters of St. Francis in Dubuque from Immaculate Conception, Charles City, IA on August 25, 1945. She was received with the name Sister Mary Priscilla on August 12, 1946 and made her final profession of vows on August 12, 1951.

Sister is survived by nieces, nephews, and her Franciscan sisters.

Sister was preceded in death by her parents; her sisters, Genevieve (Ernest) Katz, Margaret (James) Perkey, and Ruth (Leonard) Balek; and her brothers James (Helen) Stork and Francis (Myrna) Stork.