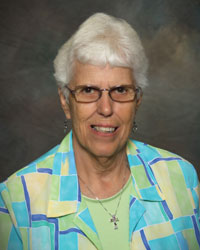 The remembering service will be livestreamed on Monday, June 28, at 11 a.m. at https://www.youtube.com/dubuquefranciscans. Viewing of the body will be from 10:30 a.m. to 12:30 p.m. Wednesday, June 30 in the Francis House Chapel with a Mass of Christian Burial at 1 p.m. There is limited seating available for the mass and some may be asked to view the livestream at https://www.youtube.com/dubuquefranciscans in the Clare Conference Center. The live stream will also be archived for later viewing.

Norma Jean, daughter of the late Leo and Rose (Bengfort) Holthaus, was born February 10, 1934 in Ossian, IA. She was baptized and confirmed at St. Francis deSales, Ossian. She entered the Sisters of St. Francis in Dubuque from St. Francis deSales on August 25, 1952. She was received with the name Sister Mary Nathan on August 12, 1953 and made her final profession of vows on August 10, 1958.

Sister received her master’s degree in counseling from Loyola University, Chicago, IL. She ministered as a teacher in Iowa at North Washington, North Buena Vista, Ionia, Temple Hill, and in Illinois at Corpus Christi. She also served as a principal at St. Mary, Waterloo and an elementary school counselor for Waterloo schools.

Sister is survived by her sisters-in-law Gertie Holthaus and Lucille Holthaus; brother-in-law Nilus Imoehl; nieces, nephews, and her Franciscan sisters.

Sister was preceded in death by her parents; her sisters, Esther (Carl) Selander, Rosella (Lawrence) Beckman, Rita (Edward) Schwendau, and Jenny Imoehl; and her brothers Arthur and Cletus Holthaus.